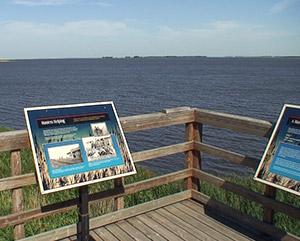 The RM of Portage is comprised of communities of various sizes and backgrounds. Below is a description of our communities with links to their own web sites, where available.
St. Ambroise

Dakota Plains
Dakota Tipi
Delta
Delta Marsh is one of the largest and most famous freshwater marshes in the world. Large numbers and species of birds are found here, with hundreds of species of birds recorded in the marsh area.
The Delta Marsh Bird Observatory is one of the busiest bird banding stations in Canada. During spring and fall migrations, Delta Marsh becomes a birder’s paradise. Large numbers of warblers, sparrows, and other songbirds, as well as tundra swans join migrating geese and ducks as they funnel into the field station area to rest on route; or stage for short periods of time.
A large portion of the lake front along the south shore of Lake Manitoba was established as a privately owned and operated station, known for its research and educational activities. There is a viewing tower, boardwalk and interpretive trail for the public at Delta Beach

Southport
Southport is a former military training base that has expanded to include an airfield, military flight training, education programs, commercial and residential properties and a recreation centre.

Located in picturesque Manitoba, Southport is a rural community with vast open skies and outdoor spaces where people come together for the perfect balance of lifestyle and work.
Scroll Up